Why is it important to stand by the organisation’s diversity policy?

Why should a person’s gender, or the fact that a person has a colour, or a disability, determine whether or not she/he is allowed to hold a position?

Organisations can have different reasons to start working with diversity policy:

For every organisation, the motives for starting a diversity policy must be clear. Only then will there be a willingness to invest in a change process.

Tip: Consider why it is important for you to think about the diversity policy of your organization?

This is policy within an organisation, aimed at recognising and valuing differences among people (employees and customers), in order to achieve the most efficient and effective realisation of organisational objectives.

Within an organisation, usually a few pioneers are enthusiastically working on the theme of diversity. They may have different reasons for doing so. After a few conversations with the manager and colleagues, it turns out that it is not easy to get the rest to share the enthusiasm.

Without a problem awareness, it is difficult to initiate a change process. The need for diversity policy is not evident. Willingness only emerges when there is a prevailing feeling in the organisation that there are issues that need to be removed.

How can a sense of urgency be developed? 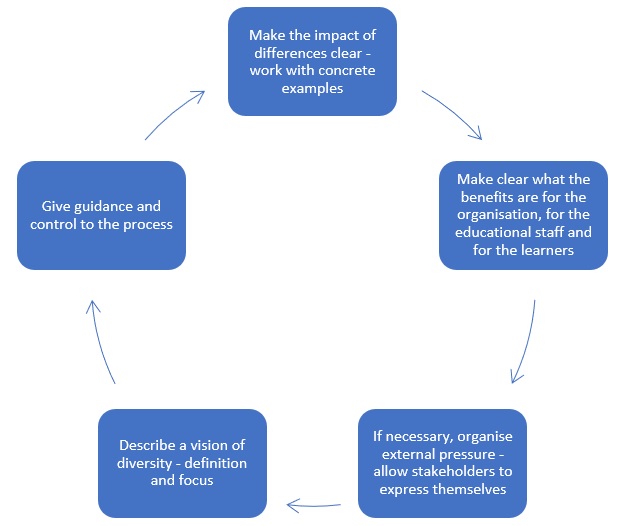 It starts with defining the concept of diversity.
Diversity is, of course, a broad concept: people can differ on an infinite number of aspects.

Diversity is primarily about dealing with differences in:

However, it is not only about differences.
It is also about dealing with discrepancies:

Also new contradictions have arisen during the course of time:

Diversity is also about have’s and have nots.

Moreover, diversity is related to having access to, not being discriminated against and not being excluded. Diversity is strongly linked to equity: equal chances, equal treatment and equal remuneration.

Finally, diversity is also dealing with contradictions such as preferential policy, positive discrimination, politically correct thinking and acting. It is not only a dialogue of consensus, but also of dissensus.

Tip: Get into the other person’s skin and take a look at your organisation with her/his eyes.

In practice, a focus on certain forms of diversity is necessary to make real progress. For example, the organization can choose to focus on difference in origin and sexual orientation because these are the areas where most progress is expected. Secondly, it is necessary to determine which organisational units the policy focuses on. A common mistake made by organizations considering implementing diversity policy is that they focus on either human resource policy or service provision. However, a combined approach that focuses on both personnel, customers and the way diversity is managed, can offer the organization the greatest added value.

DivCap will guide in reflecting on the diversity policy in your organisation through:

Learn more about your own institution